From Game to Movie: A Review of 'Escape Room'

Ever since 1993’s live-action Super Mario Bros. movie, the trend of turning video games into movies has only grown stronger. In the past couple decades, gamers have seen many of their most cherished games make it to the big screen. The last few years alone have seen the Assassin’s Creed and Tomb Raider series arrive in theaters. Even now, gamers are expected to see both Sonic the Hedgehog and Pokémon get live-action adaptions in 2019. Yet, throughout all these adaptations, one genre that always seems to work is horror. Whether it’s the two-part Silent Hill movie series, or the six installment Resident Evil series, movies based off horror games seem to have staying power. And one thing that helps keep this trend interesting is that this horror movie treatment isn’t always limited to video games. Right now, escape rooms have become a growing trend as a type of physical adventure game, and it was only a matter of time before audiences saw it taking to the big screen as well. 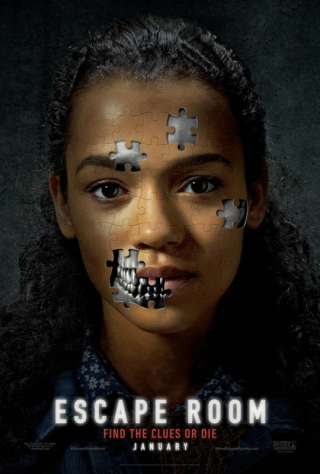 My name is Dexter Woltman. Not only am I Junior Writer/Designer here at Brunette Games, but I’m also an employee at Escape STL, a company that creates and operates escape room games. Essentially, escape rooms are games that see players locked in a confined space where they must work together to solve a series of puzzles and escape a room before the timer runs out. Much like most video games, escape rooms always have a story. Players are in there for a reason, and if they don’t get out in time, their lives are at stake. But what if these stakes were real? Director Adam Robitel tries to answer that question with Escape Room, a 2019 psychological thriller that pits six adventurous strangers in an escape room where the matter of life and death is a very real concern. As an employee at an actual escape room, I can say this film is both logically insane and satisfyingly enjoyable.

In the film, the six players enter the escape room much like any other group I’ve personally seen come through one of my rooms. They’re all there to play a game, and ultimately, they hope to win it. The six players in the movie are told they’ll receive $10,000 each for winning, which is already a much higher incentive than anyone would actually get for completing a regular escape room. The catch? This escape room has deadly consequences, but of course the players don’t know that going in. These players are also complete strangers to one another, having never met before being put in the room together. This introductory aspect of the team initially comes off as a bit odd. Typically, escape rooms are for groups of friends or families. It’s for people who want to have fun. Personally, I’ve never seen someone who wanted to be locked in a room entirely with strangers, but I’ve also never seen someone being offered $10,000 to do it.

Leading the film are stars Taylor Russell and Logan Miller, playing the respective roles of Zoey Davis and Ben Miller. They’re joined by fellow cast members Deborah Ann Woll, Tyler Labine, Jay Ellis, and Nik Dodani, together forming the team of six players. Ben and Zoey are the first characters the audience is introduced to. Zoey is a socially inept college student. She’s a genius, but also too shy to speak out. Meanwhile there’s Ben, a young man struggling to make a living in a grocery market. While both actors give convincing performances, it’s Zoey who proves time and time again that her oddities are merely part of a larger, brilliant whole. Rarely do we get to see young women of color leading these types of films, and Taylor Russell never fails to go all-in with every scene. There’s also much to see with the supporting cast, with Deborah Ann Woll giving a noteworthy performance as a veteran struggling with ongoing PTSD.

The film certainly has interesting characters, but where it often falls short is with these characters’ interactions with one another. Right at the beginning, the only one of them that has ever even done an escape room is Nik Dodani’s character, Danny. Not only has he done an escape room before, but he’s done over 90 of them, making him quite the expert. His character acts as a vehicle for introducing the rules and logistics of an escape room, especially seeing as how an employee lecturing them on the rules, something I frequently have to do, just isn’t very immersive to the movie-going experience. However, despite being the only member of the team with any experience, most of the other characters just make fun of him. They think he’s weird, and they’re rather mean to him. One would think that if $10,000 were actually on the line, people would listen to the only person that’s done one of these things before. There’s also the matter of the two leads, Taylor Russell and Logan Miller. Separate, they're intriguing, but together, the characters just don’t make sense. There’s no real chemistry between them, and it makes their trust for one another seem uninspired.

What is inspired, however, are the games themselves. Escape Room takes its players through a series of several rooms. Most modern escape rooms actually have more than one room, but this movie takes it to a new extreme. Honestly, it makes real escape rooms look almost dull in comparison. Each room is brilliantly designed. Not only are they diverse, but they contain truly unique concepts you wouldn’t see anywhere else. Although this film certainly pays homage to such horror franchises as Saw and Hostel, albeit with considerable less gore, its concept takes it places no other film can go. The puzzles are also fresh, bringing unique ways of thinking to every challenge. Truly, it’s just a fun movie to watch. Even in areas where it lacks depth, it makes up for it with spectacles and action pieces that continue to carry the film forward.

Another highlight of the movie is its sense of danger. At first, none of the characters know that their actions might have lethal consequences. Even in the first room, what seems like danger they try to brush off as just an effect. However, when the first character dies, the reactions of the rest of the cast are truly intriguing. For the first time, these characters are aware of the danger. At that split-second moment, everything changes for them inside, and the actors portray it wonderfully.

In contrast, however, sometimes the danger is also almost distracting. As far as actual plot goes, this film doesn’t have much. It’s really just people trying to escape rooms, and that’s about it. The film spends so much time with its dangerous set pieces, it fails to develop an ongoing narrative. Even the Saw movies, which also feature people going from room to room, always features a secondary story that correlates with its main games. Sure, in Escape Room, certain characters develop in certain ways, but it doesn’t really pay off as well as one might hope. It doesn’t help that the film seems to kill off its more likable characters first, leaving its less likable characters to carry it through the end. By the time the players actually do reach the final room, it’s hard to really care about what happens to some of them. This is only weighed down even further as the film suffers through its final act. Almost as if it wasn’t sure what it wanted to do with its finale, when the actual escape room ends, the film just seems to stagger, jumping around, as if the show creators weren't sure how to wrap it up. It also feels like the movie ends 10 minutes too late as it tries to stuff what could have been two hours worth of conspiracies into just a few scenes. So while it’s an entertaining ride, it doesn’t hold a lot of substance.

With a movie like this, there are also expected deviations from its source material. Its source material being actual escape rooms, that is. To start, it’s definitely a lot more extreme. While watching the film, I couldn’t help but think of the wild costs it would have actually taken to make each room. And when one of the rooms practically destroys itself, I leaned over to the person next to me and told her how much of a nightmare it would be to reset it before the next group. From an employee’s perspective, this movie is downright impossible. But from a movie-watching perspective, it’s quite the thrill ride. After all, the film does still stick to the core of what makes an escape room what it is. There are puzzles, players, a locked door, and hidden means of escaping. One core aspect of escape rooms that might seem to have changed, however, is the timer. Escape rooms typically always have a ticking clock on the wall. It lets players know how much time they have to escape  before it’s a mission failure. In the movie, however, the ongoing timer is noticeably absent. Yet, in an intriguing move, the movie replaces the actual timer with a timer that’s a bit more creative. Instead of a clock ticking down on the wall, each room has its own type of environmental timer. Whether it’s increasingly dangerous heat or an escaping gas, the players still always feel a sense of urgency. Even if there’s not a real timer on the wall, the players will still fail if they doddle for too long. It’s a move that strays from its roots, but keeps the film more fun.

Overall, Escape Room is an enjoyable ride. It takes a modern trend and evolves it into a theatrical set piece. While the story itself is lacking, it’s hard to expect anything too deep from this type of film. The movie certainly lives up to its promise of displaying an extreme escape room with death as an actual consequence. And, even if some of the character choices are dull or difficult to accept, Taylor Russell does a great job at keeping the audience engaged. The creators stayed true to the concept of an escape room, all while pumping the film with scenes meant to spike adrenaline and thrills. While this film may not leave a lasting impact on its audiences, it's sure to keep them entertained for a couple of hours. And with this kind of concept, I certainly wouldn’t be surprised to see a sequel in the near future.

Giving Thanks for Great Stories: A Brunette Games Roundup