Deco & Builder Card & Board Interactive Novels HOPAs Resource Management Console The Team Contact/Press
Announcement: Brunette Games Teams Up with Cherrypick on Interactive Novel Series
Narrative Design 101: Do We Need Stories? How Do We Make Them Work in Games? 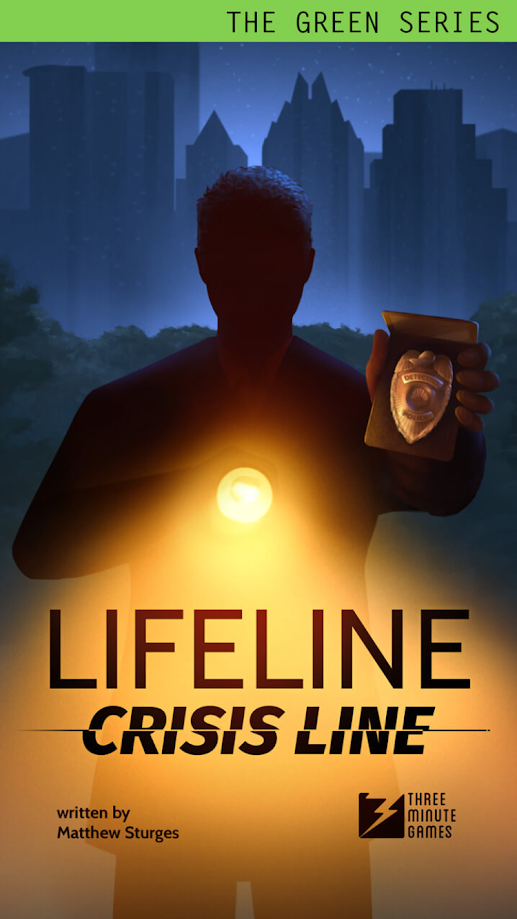 Junior Writer/Designer Dexter Woltman here with a game review for you. At Brunette Games, we're all big fans of the Lifeline game series, so I thought I'd take a moment to review Crisis Line. If you love the mystery genre, you should definitely check it out.

Who killed Jason Leder? That’s the question everyone is asking in Lifeline: Crisis Line, a game of interactive fiction that allows the player to shape the story as it unfolds. Written by Matthew Sturges, this mobile game sets the player in the position of a HelpText volunteer. After being contacted by Austin homicide detective Alex Esposito, the player is asked to assist in a murder investigation, one that spins a tale of suspense, mystery, and unexplainable circumstances.

Crisis Line is one of numerous installments in Big Fish’s Lifeline series, where players are put in contact with well-developed characters facing dangerous situations in real-time. Previously on the blog, Lisa conducted an interview with Dave Justus, the author of the original Lifeline installment and its various sequels, Lifeline 2: Bloodline, Lifeline: Silent Night, and Lifeline: Halfway to Infinity. This installment set squarely in the mystery genre proves the series has legs far beyond its first author. 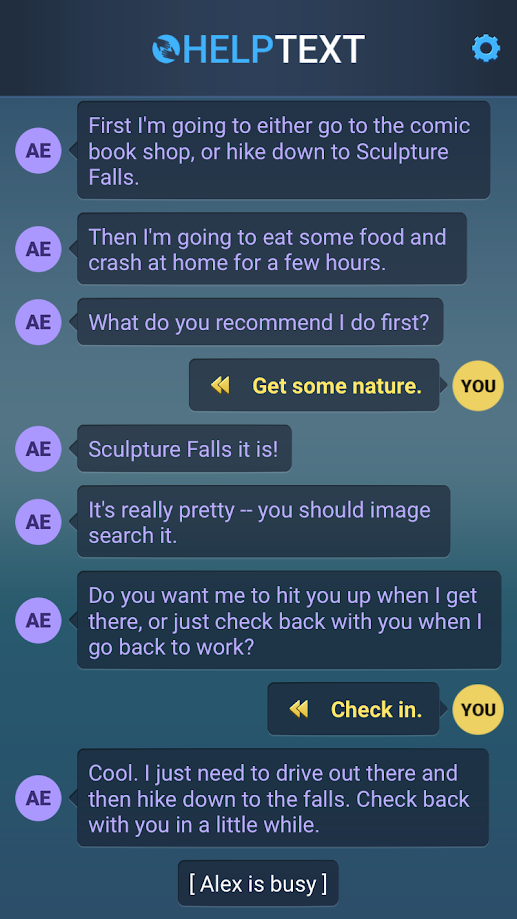 Your chat companion this time is Alex Esposito, a detective who unofficially deputizes the player into becoming his partner on a murder investigation. The victim is Jason Leder, a lawyer who had recently been put in charge of selling mysterious crystals with unexplainable powers. With the crystals missing and no suspects, it’s up to the player to help Alex progress through the investigation and solve the case.

While the original Lifeline story put players in contact with a stranded astronaut on a desolate moon, Lifeline: Crisis Line finds its main character in a less isolated environment, on the streets of Austin. With a populated setting and numerous characters for Alex to interact with, it feels as if there’s more to this world than just the player and the main character. In addition, the concept of Lifeline: Crisis Line also takes a different format. Rather than just trying to survive, as in the original game, in this one, players try to solve a murder. This allows the opportunity to choose which clues and suspects to follow, as well as orchestrate numerous interrogations and interviews with other interesting characters. 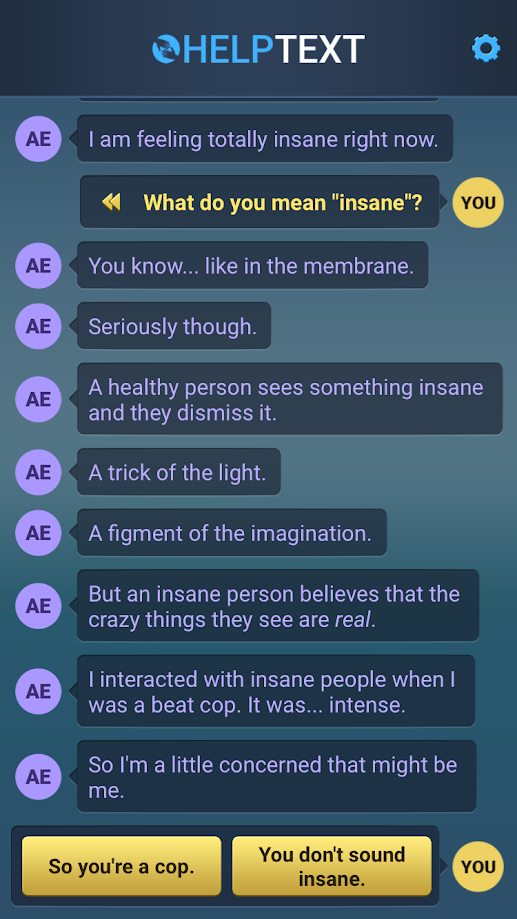 However, with this expansion also comes a greater suspension of disbelief. Despite taking place in a more realistic setting than other games in the series, such as the original game’s desolate moon or Lifeline: Whiteout 2’s nuclear wasteland, it can be harder to accept that the player has been put in communication with Alex Esposito. In the populated streets of Austin, Alex could talk with anyone. There are several other people at his immediate disposal, from an official partner at the police station to his own sisters. The game puts a lot of emphasis on Alex’s career and his dedication to the law, yet he blatantly obstructs confidentiality to talk about private details regarding a murder case to a complete stranger on HelpText. However, there's a clever acknowledgement of this, with Alex sarcastically mentioning, “Usually I only open up to strangers on the Internet,” when talking about his difficulties with trust.

One core aspect of Lifeline: Crisis Line is its emphasis on choices. In this regard, Lifeline: Crisis Line is a triumph. In most situations, the choices the player is left to make truly do impact the game's story. There are only a few instances where choices feel irrelevant, such as Alex disagreeing with the player on whether to add Jason Leder’s wife to the suspect list, regardless of which choice the player actually makes. However, most of the time, the choices do feel relevant. Not only can the player make choices that determine Alex's survival, but the player can also frame choices regarding clues and suspects, all which play heavily into the ultimate goal of the game, which is to solve Jason Leder's murder. Depending on the player’s eagerness to explore or willingness to put Alex’s life in danger, it may be a lot easier - or more difficult - to reach that goal. 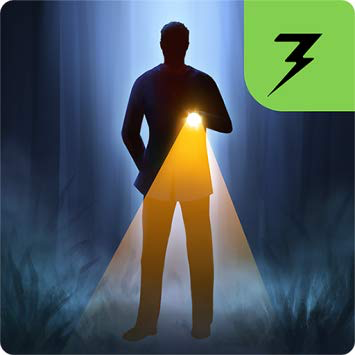 The choices also allow the player to shape what kind of detective Alex Esposito is. One prime example is when Alex is interviewing a close confidant of Jason Leder. This confidant, truly heartbroken by Jason’s death, is presented in a very fragile state. It is up to the player to decide whether Alex should tell the truth about the gruesome reality of Jason’s death or instead tell the confidant that it was quick and painless, ultimately weighing emotion against duty. Situations like this are presented frequently throughout the game, allowing various opportunities to discover which manner of detective work is best needed for each encounter.

The choices presented give players the opportunity to shape the game according to their own needs. One example is when Alex describes the details of the murder to the player and asks whether the player wants him to leave the gory details out of his description. Ultimately, this allows players to filter the game to their own sensitivities. There are also choices that allow players to either stay focused on the main story or allow it to be derailed at moments to explore the depth of Alex’s character. It entirely depends on player choice.

One distingquishing aspect of gameplay for Lifeline: Crisis Line is its “idle” time. Idle times are moments in the game when Alex is occupied with something and is away from the conversation, intending to immerse the player in a real-world environment. In the aforementioned interview, Justus remarked, “The ‘idle' time was essential to Three Minute's concept of a real-time conversation; it takes time for the characters to walk to a new location, or to eat a meal, or to rest for a bit.” Sturges upholds this aspect of idle time to good effect, often having Alex take breaks from HelpText to rest or drive. These idle times are also presented realistically, with one example being a drive taking 30 minutes instead of 15 due to traffic. 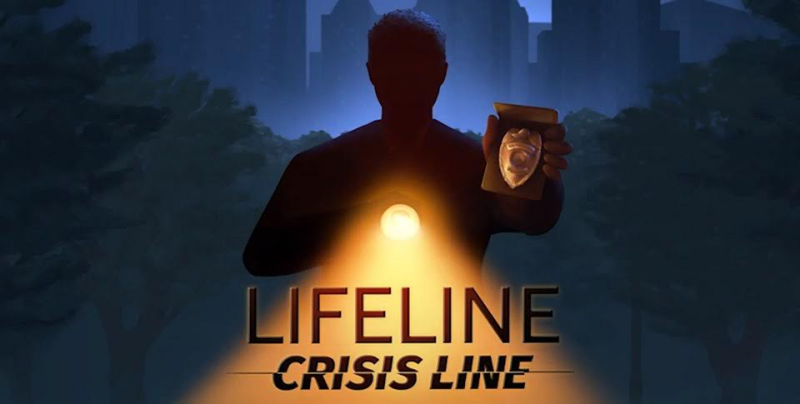 Idle times also present players with opportunities to take a break from the game without becoming overly addicted. However, it should be noted that the game does also offer a “Fast Mode,” which skips the idle times entirely. But as Justus points out in relation to the original Lifeline game, “What we found was that, overwhelmingly, the majority of players chose to switch back to ‘real-time’ after trying ‘fast’ mode. The preference for the delays is considerable.” It is true that playing in real-time does add a greater sense of depth to the story that makes it seem more vibrant and present in everyday life.

Further mechanics of the game also include the ability to rewind the story to previous choices and re-make them. For players curious about all the possible branches for each choice, this feature will be welcome. It also allows players the opportunity to go backwards in the story if they reach an untimely situation in which a choice has led to Alex’s death.

However, this also means that the makers of the game were aware of this feature and thus, more willing to create intense situations with a lot of potential for failure. At several points in the game, Alex finds himself stuck in a difficult encounter where every choice seems to lead to death, truly forcing the player to double back and examine the outcomes of each potential choice. While this may become infuriating at times, it does succeed in demonstrating the danger and high stakes of this particular murder case.

Justus laid a lot of groundwork for the Lifeline series, especially regarding the Greens, an alien species often referred to as “Occupiers” that like to take host in living bodies and assume control of the body’s mind. The Greens are a primary focus throughout the series, with Lifeline: Crisis Line even being labelled as part of the “Green Series.” In most cases, the story of Lifeline: Crisis Line stands on its own. However, there are multiple instances where Sturges works to connect Alex’s murder investigation with the Greens. It’s not necessary to have played the other games to understand these moments of the story, but these instances do take prominence and often distract from the ultimate goal of solving the investigation.

The presence of the Greens in Alex Esposito’s story is a double-edged sword. On one hand, it’s nice for the game to reference other games in the series and maintain an overall narrative in the Lifeline universe. On the other hand, this alien story often distracts the player from the more grounded story of discovering who killed Jason Leder. Just when the game is cementing an emotional connection between Alex and the player, an alien shows up and traps Alex in a space-like realm, entirely withdrawing the player from the immersion of what should be the focus of the game. The aliens add a touch of surprise to the story, but it’s not necessarily the kind of surprise the game needs. 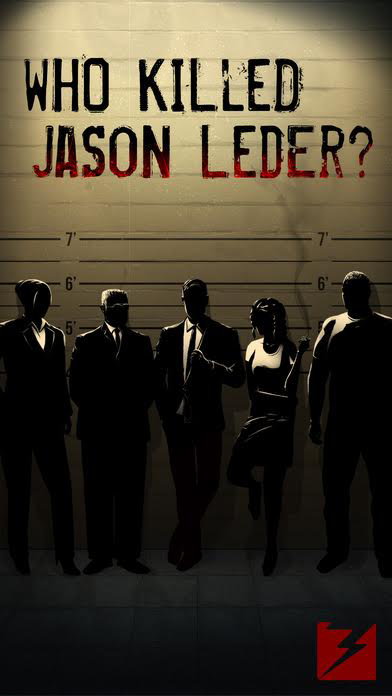 The Greens distract from the main thread up until the ending moments of the game, which itself is a weak point to an otherwise fulfilling adventure. Without giving away any spoilers, the endgame does a great job of making players feel accomplished in their investigation of Jason Leder’s murder. However, the fault comes in the game’s very last moments, where even the best achievable ending of the game leaves Alex in an uncertain fate, ending on a cliffhanger that sets up a sequel that has yet to be seen. Even though HelpText assures the player they did the best they possibly could, certain players may not be able to help but feel their efforts less impactful than in other games in the series.

Lifeline: Crisis Line is a well-woven tale of mystery and suspense. Its main character is very well-developed and sure to entertain the player throughout the entirety of the story. Sturges takes the Lifeline formula and applies it to a new environment, cementing the player in a deep murder investigation that breathes new life into the series with a strong narrative and solid framework of mechanics. In addition, Sturges proves he can respect the original writer’s legacy by establishing the Greens as a factor in the story. While this factor may seem overly distracting to some players, others may appreciate its deep ties to the rest of the series. Ultimately, the promise of Lifeline: Crisis Line is to engage players in a choice-driven, real-time story. Not only does it succeed in this promise, but it may even surprise players with its extraordinary depth and numerous twists. All in all, this is an entertaining game with more strengths than weaknesses. However, the only choice that truly matters in Lifeline: Crisis Line is whether you’ll allow it the chance to entertain you as well.

Lifeline: Crisis Line is available now on the App Store and Google Play. It was developed by 3 Minute Games and published by Big Fish.

Full disclosure: Lisa Brunette is former manager of the narrative design team at Big Fish. She consulted on Lifeline: Whiteout.