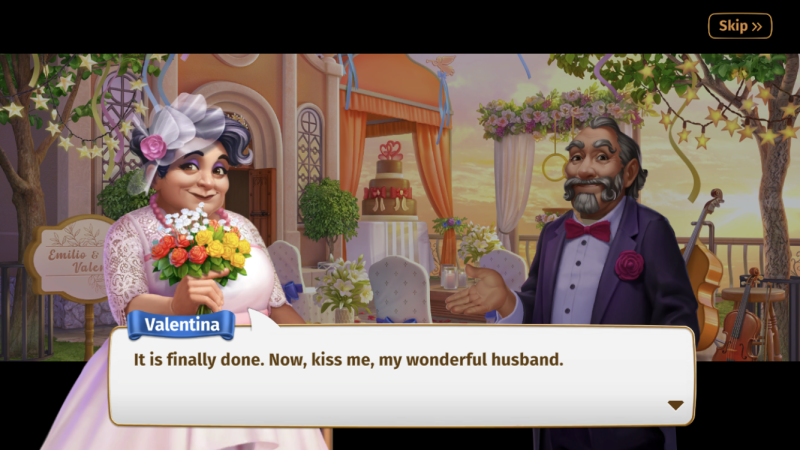 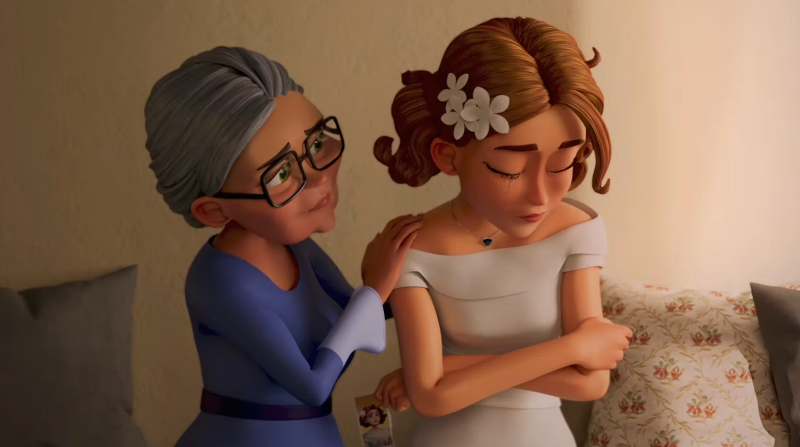 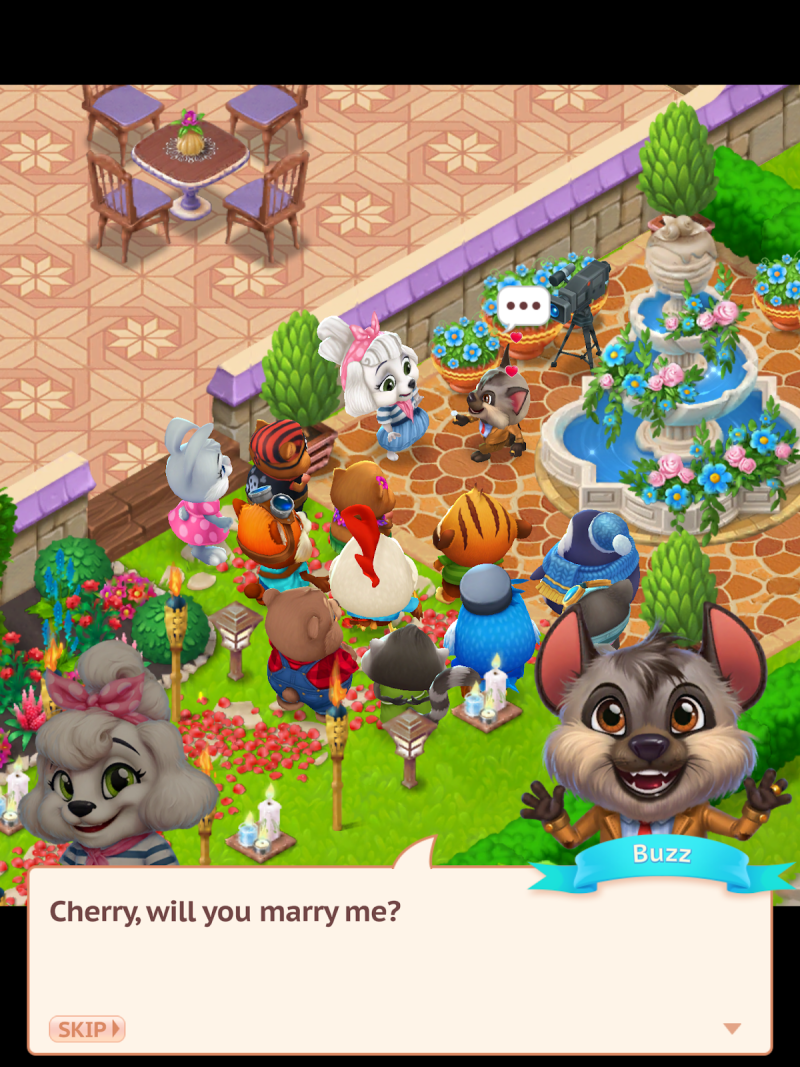 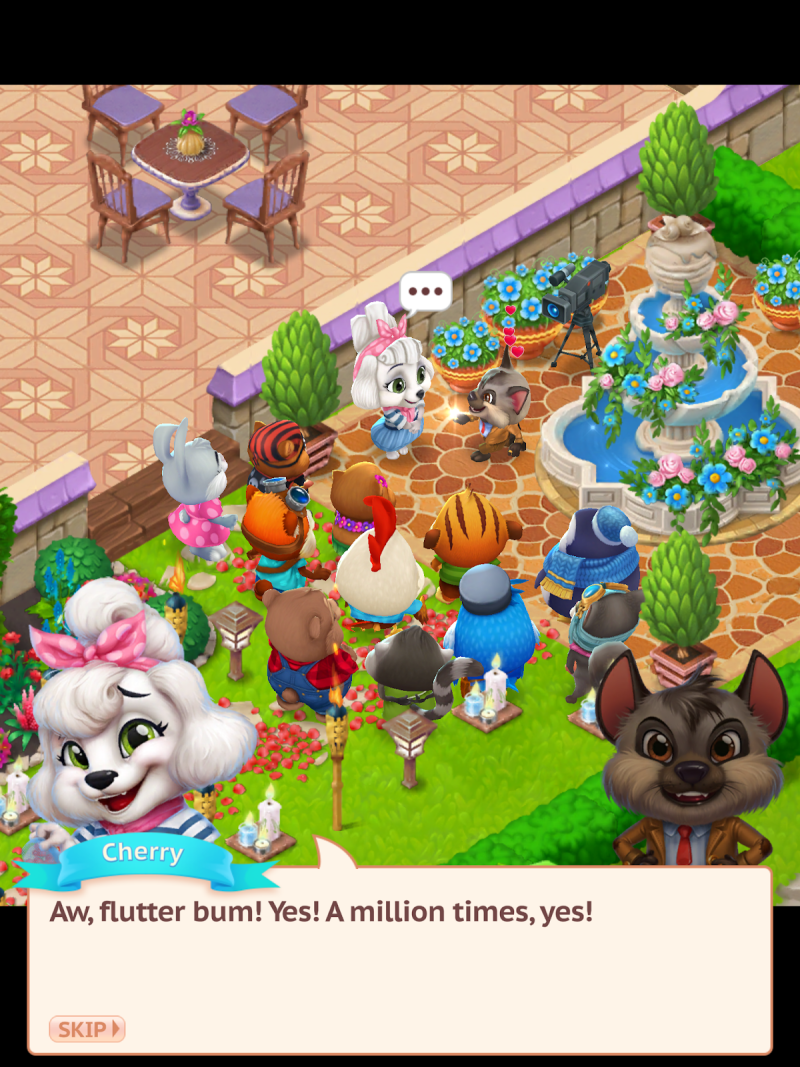 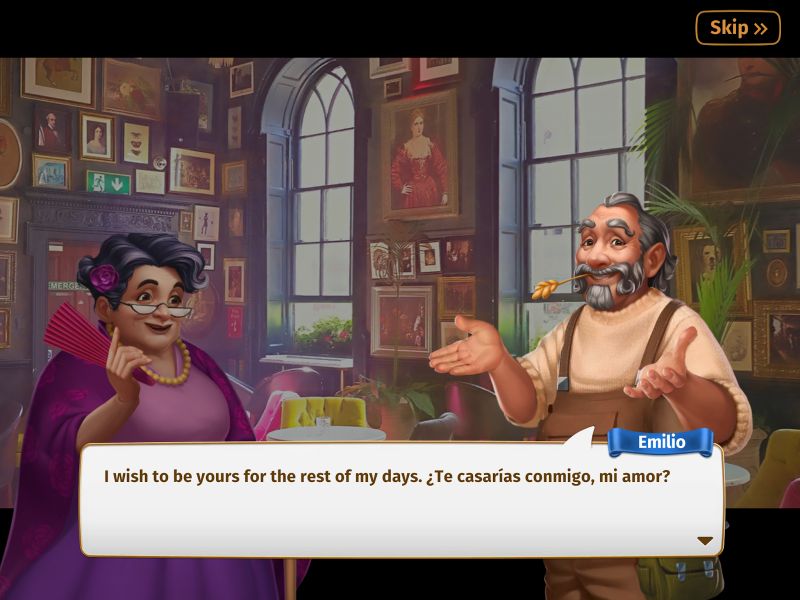 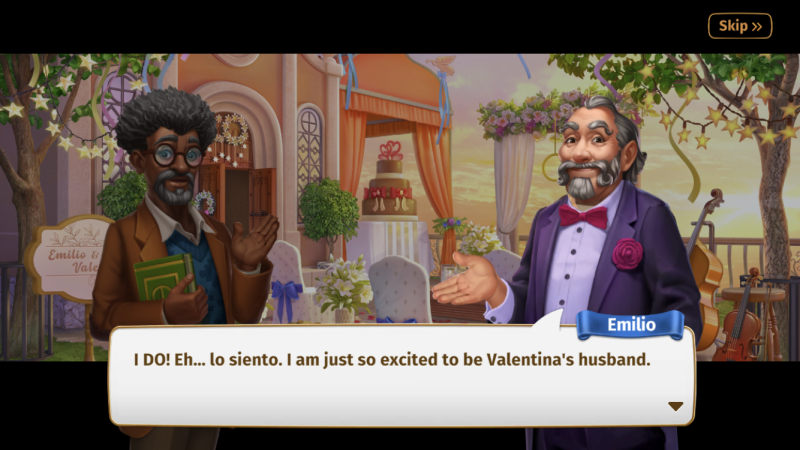 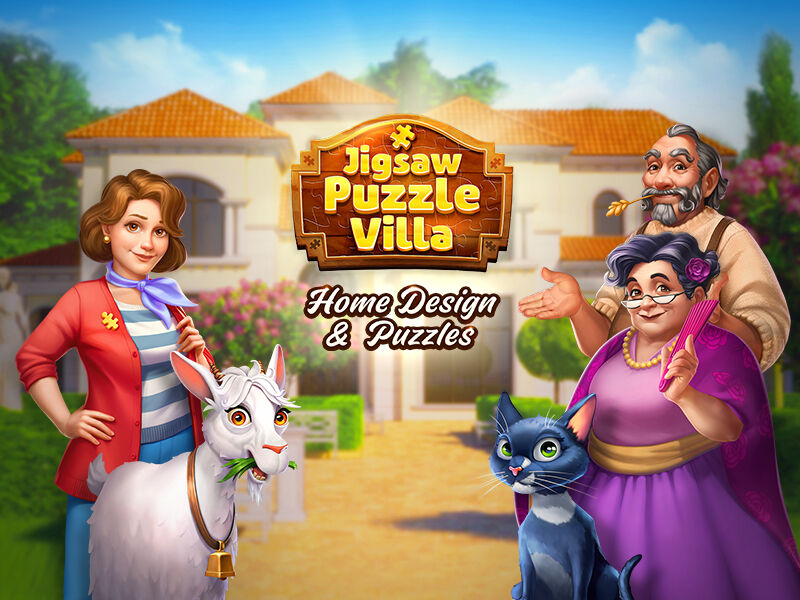 Brunette Games is thrilled to announce the release of ZiMAD's new game, Jigsaw Puzzle Villa. Lisa Brunette designed the concept, story, and most of the characters, as well as wrote the dialogue for the first few chapters. I extended the story design, characters, and dialogue in the later launch build chapters, with help from Jenna Hume and Dexter Woltman.

In this endearing game, you play as Justine, a passionate jigsaw puzzler who finds herself falling in love with Spain when she attends a championship competition there. Friendships blossom, romance sparks, and beauty abounds as Justine helps her host and new friend Valentina give her villa a new lease on life.

ZiMAD's passionate team was a dream to work with on this project, and their dedication is clear in the beautiful art they've created to accompany this rich cast of characters. If you're still not sold, wait until you hear that you get to name a goat... one who's a surprisingly good listener, at that. We know you'll be as charmed by this game as we are. Check it out on the Google Play Store now! 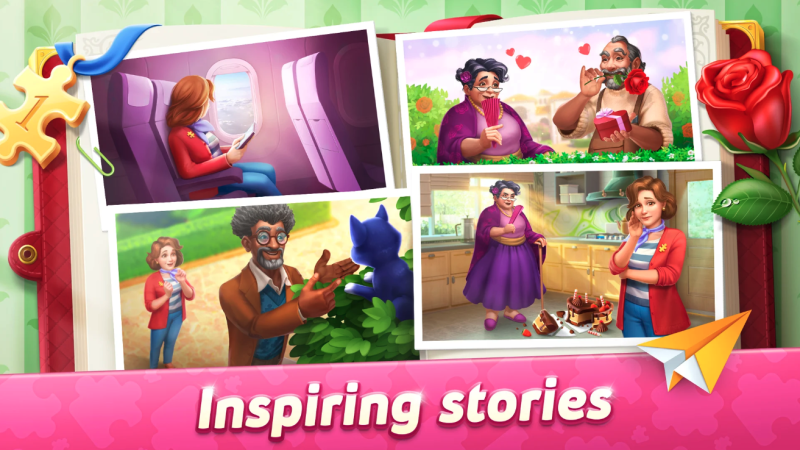 Welcome to the Puzzle Competition World! Justine needs your help! Win the championship by solving jigsaw puzzles! Renovate the Villa! Solve a jigsaw puzzle, earn coins, and obtain fancy modern things for the house! Turn an abandoned mansion into a stunning Villa!

HOW TO PLAY
1. Put puzzle pieces together to complete colorful HD pictures;
2. Gain energy, earn coins, and use them to decorate the Mansion;
3. Use boosters and hints to solve puzzles – re decor the House as quickly as possible!
4. Renovate the first room and go to the next one, which will be even more interesting! There are so many rooms in this old house!
5. Follow the captivating plot of Justine’s puzzle competition story.

You have an amazing opportunity to renovate and decorate an old Spanish Villa the way you want!
But remember, puzzle solving is an important mission in this home design game. You can choose the level of difficulty and the number of jigsaw puzzle pieces. Do puzzles to unlock more furniture for the Mansion!

Our Case for Stellar Gameplay and Story Integration 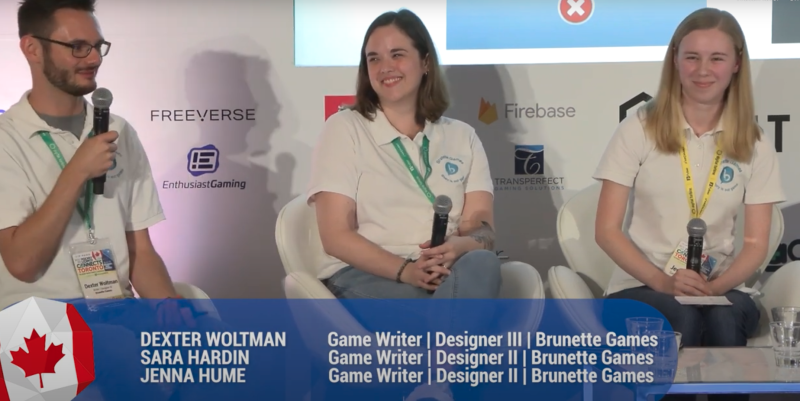 There's little doubt that a great story adds value to a game, especially in the casual game space. But something that is often overlooked makes a huge impact on the success of the end result—how that story is integrated with the actual gameplay. Players notice when game designers go the extra mile to incorporate gameplay with the game's narrative, and proper integration will help a game's story really sing.

The Brunette Games team took our expertise to the stage with a presentation on this very topic at 2022's Pocket Gamer Connects conference in Toronto, and we think the lessons are valuable enough to share here on the blog in more detail.

The first step in successfully integrating gameplay and story is understanding how game writing differs from writing for other forms of media. People consuming a game's story aren't listening to it in the background on the TV—players are actively engaged, and the experience is interactive. They didn't download the game to passively watch something unfold; therefore, the story must be written in service to the gameplay. One way to accomplish this is to immerse players in the game's setting.

The tutorial in Archosaur's Cooking Confidential is delivered by the PC's best friend, Elena.

Immersion can be achieved in a number of ways. One is to deliver tutorial messages through a member of the game's cast. Details like this transform dull instructional text into more of an interaction. More often than not, mobile game players are actively playing more than one game at a time, switching between them as their abilities recharge and their lives replenish. Something like tutorial messages may seem like a tiny detail, but unique touches add up to make your game stand apart from its competitors.

Keep in mind: The majority of players who choose games with narrative want to engage with the story and its characters. In other words, they want to be active participants.

Giving players the feeling they're directly influencing the game's world is another way to immerse them in the experience. This goes along with the idea that the game's visuals should work in tandem with the text and dialogue. 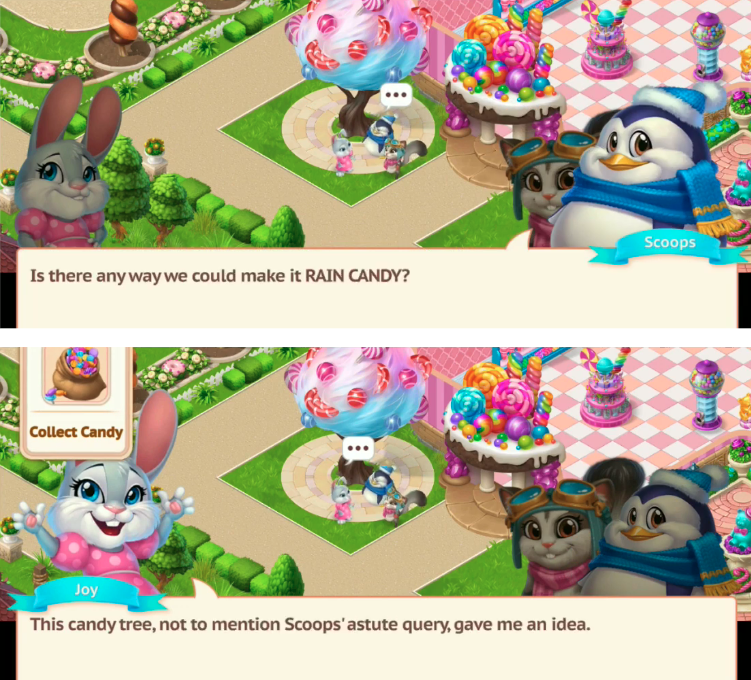 In Redemption Games' Sweet Escapes, tasks are often sweets or food-themed. Instead of a normal tree, for example, the player might place a tree with cotton candy fluff instead of leaves. The player, while being actively engaged in the decoration element, is constantly reminded of what makes the game's world unique.

Story and Gameplay Should Support Each Other

The narrative goals of the story's characters should also support the gameplay goals. In Gear's M&M'S Adventure, Red runs around New York as he attempts to find the other M&M'S characters. 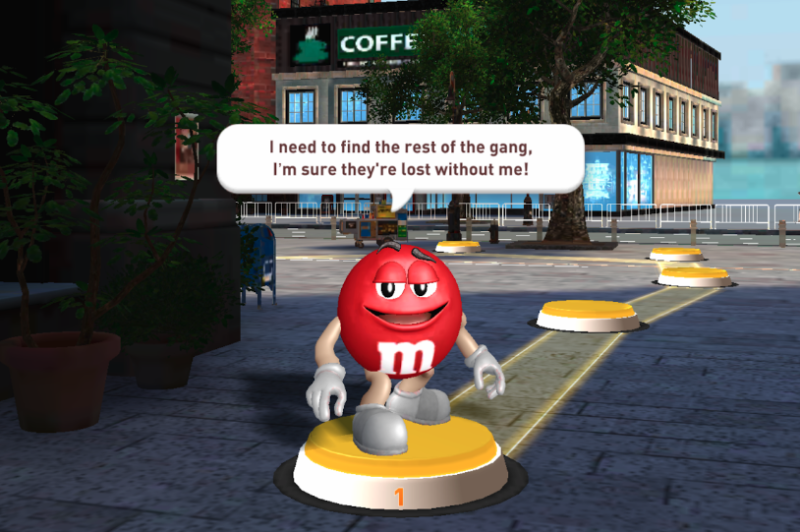 This supports the gameplay in a few ways:

The gameplay should also accommodate the narrative themes of the game. 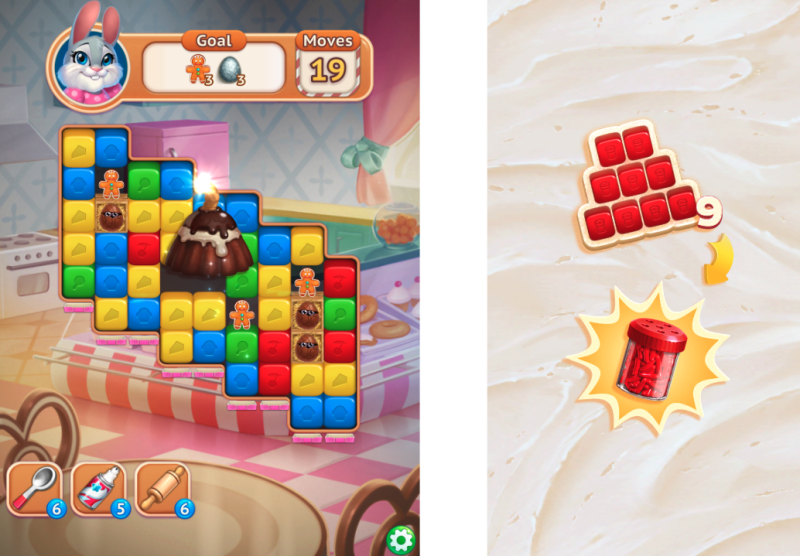 In Sweet Escapes, the puzzle items match the game's theme: sweets and sweet shops. The boosters and blockers are thematically tied to the story to create an immersive experience. This practice is a hallmark of ours and something we've both done on many other titles and seen other designers mimic.

The Effort Is Worth It!

Finer details go a long way when it comes to making a game stand out. While considering how a game's story and gameplay can work together seamlessly, remember the following: 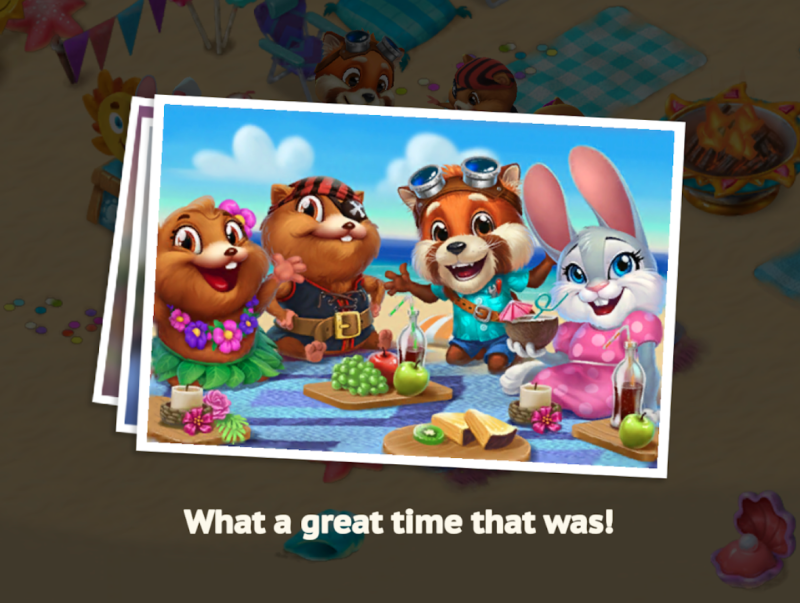