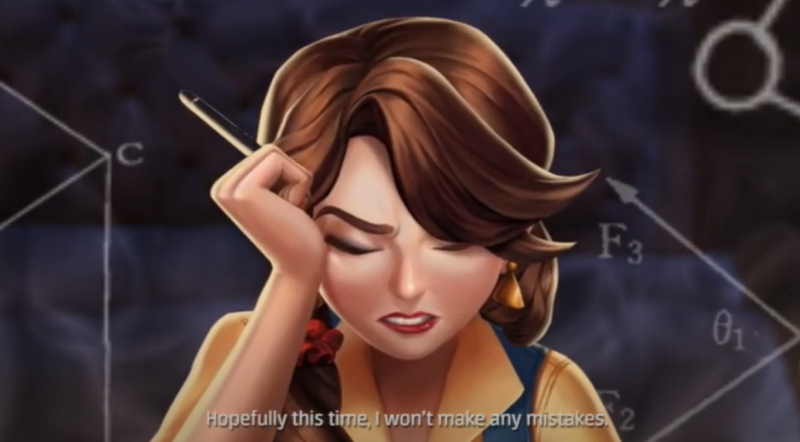 From the intro cutscene for Cash Journey’s seventh chapter.

Writing in the casual game space presents a unique challenge because of the limited word count available for dialogue. It can be difficult to convey even fun, humorous moments in a few lines of speech, but writing serious, emotional moments can be even more difficult. At Brunette Games, we believe in three pillars of game storytelling: conflict, mystery, and connection. While we covered all three in our GDC talk on the subject, here I'd like to take a deeper dive on the third: connection.

Connection is all about getting players to relate to a game’s story and characters. A great way to get players to connect with your game is by having the game’s characters experience relatable situations and emotions—the tricky part is getting these emotions to come off as authentic instead of manufactured or convenient. Here are some tricks for how to avoid this problem in your writing:

When characters experience sudden emotional turmoil after hours of happy, wholesome gameplay, players can feel a bit cheated. What happened to the upbeat character(s) they loved? Are the game designers throwing in conflict just for advertising shock value? To avoid this problem, if you’re going to eventually draft emotional conflict in your game, you need to include emotionally-complex characters from the game’s conception.

For example, in our new release Cash Journey with Jumbo Technology and Funtopia Ltd., we knew creating emotionally-stunted characters wasn’t an option. The narrative we crafted focused on three adult friends reuniting to search for a missing friend.

Centering a story around a missing person is no easy feat, because you have to get players to care about a character they either haven’t met at all or haven’t seen much of. To pull off this story in Cash Journey, we had to characterize the missing character Skye through her friends and their memories of her. 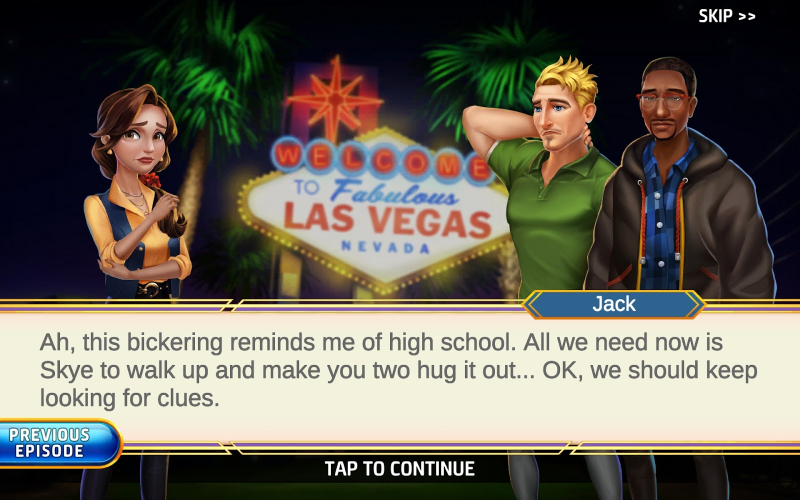 The above example characterizes Skye as a peacekeeper—someone who keeps a group together. This is a common theme throughout Cash Journey, as the others have to learn to work as a team without Skye. From Cash Journey’s first chapter, we show Alice, Edmund, and Jack trying to find Skye while they cope with their emotions surrounding her disappearance. By including these emotions at the game's beginning, players aren’t surprised later when the characters deal with regret, guilt, and worry. This is just one way to make emotions come across as truly genuine.

2. Allow the Text to Work in Tandem with the Visuals

While writing scripts, it can be easy to forget that the final game will feature copious amounts of artwork and graphics. Without the art being visible at the script stage, you can rely too heavily on text to explain emotions rather than using the text and eventual art. That’s why it’s so important to collaborate with artists while working on a script to determine needed character expressions as well as possible visuals to support the text.

In our work on Puzzle Villa with ZiMAD, we had a great level of collaboration between our writing team and their artists and designers. 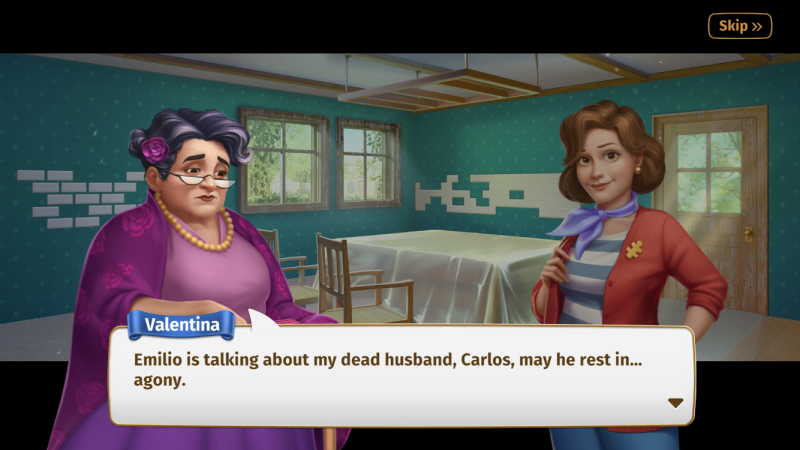 In the above example, we used both the text and character expressions to portray Valentina’s complex emotions over her deceased husband. The text by itself expresses anger, as Valentina suggests Carlos “rest in agony” instead of in peace. But her expression is sad, so it’s clear she’s still upset over his death despite her anger toward him. Character expressions may seem simple, but we at Brunette Games pick each one carefully; they're helpful for displaying complex emotions, such as the example above.

In Puzzle Villa, we were also able to create flashback scenes with the aid of ZiMAD’s artists and designers. When possible, a change of art can catch players’ attention and help them focus on the scene. 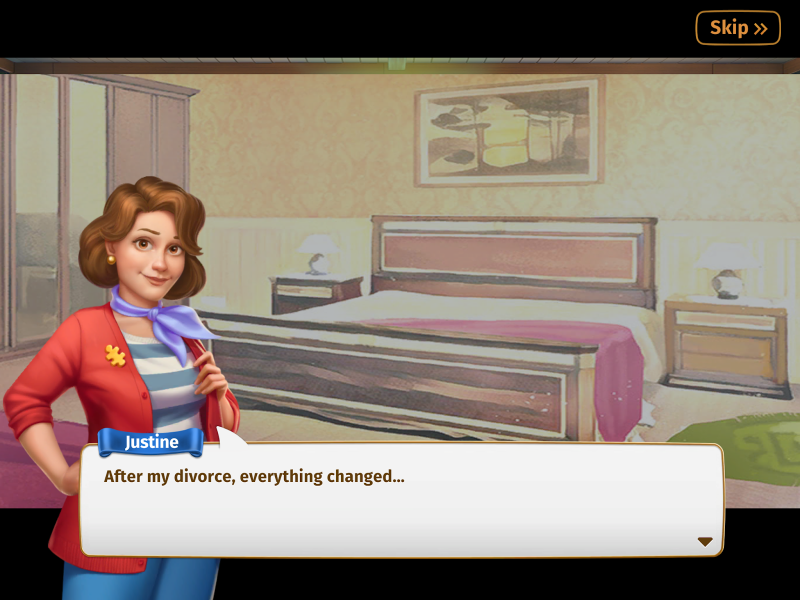 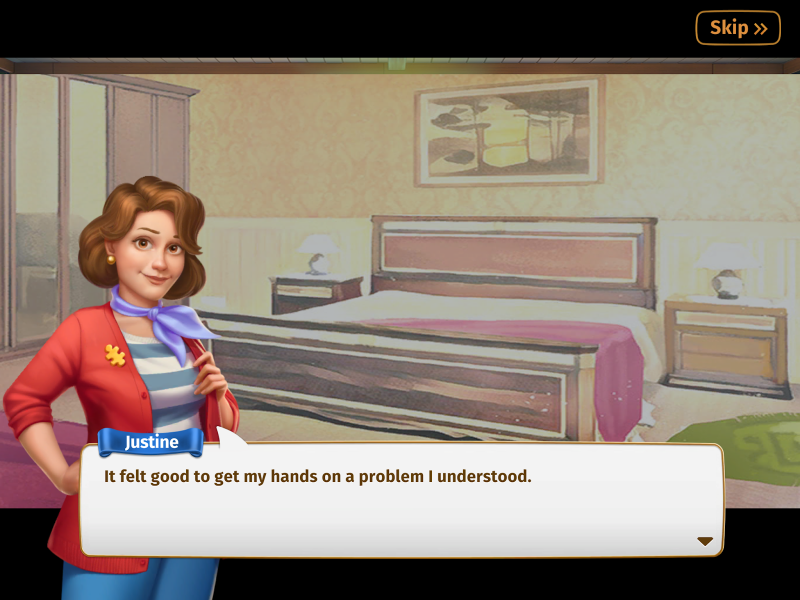 In the above example, the setting is abruptly different from the library Justine was just in. The change can help refocus the player for a big moment, like Justine reflecting on her divorce and how it led to her passion for jigsaw puzzles. By letting the art do half the work, there’s less pressure to include a bunch of text to overexplain how Justine felt. Which leads to our next point…

When dealing with complex emotions and situations, it can be tempting to explain everything in detail to the player. But this easily falls into “telling” instead of “showing,” which isn’t encouraged—you don’t want to tell players how to feel about an aspect of the story.

It's important to remember to give your players some credit—they can understand complex emotions without us needing to overexplain. Spelling out emotions isn’t necessary because players experience complex emotions themselves. A prime example of this can be found in City Escape, a title we worked on with Sparkling Society. 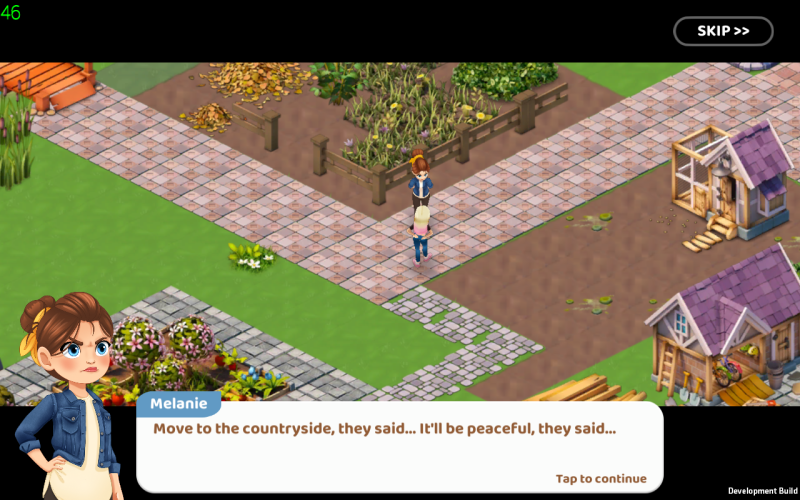 In City Escape, the Filburn family moves from the city to the country to start their own homestead. While the parents are excited about this move, things don’t go quite as smoothly as they hoped. In the above examples, we don’t have Melanie specifically state she’s overwhelmed and frustrated. The text subtly implies this instead, often in humorous ways.

With so many games in the mobile market, it’s important to provide players with a genuine experience—they can sniff out an inauthentic one a mile away. Beyond our three tips above, the key to writing genuine emotions in mobile games is to be intentional:

If you’re considering how to make emotions in your game a genuine experience for players, you’re already way ahead of the game. 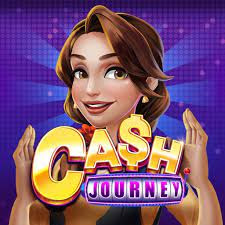 Are you ready for a treasure hunt? Along with Jumbo Technology and Funtopia Ltd., Brunette Games is excited to announce the release of Cash Journey! Cash Journey is an innovative slots game with diverse gameplay and exciting story elements. The game’s story feature is called Alice’s Journey: a tale of adventure, mystery, and friendship. It was a true joy for the whole team to collaborate with Jumbo and Funtopia on this title.

In Cash Journey, play slots to earn coins and find clues. Collecting clues will unlock new scenes and chapters of Alice’s Journey. Follow Alice, Jack, and Edmund as they explore Las Vegas, search for their missing friend, and track down the elusive Vegas Plunder treasure. You’ve never seen Las Vegas like this before!

Embark on an adventurous journey full of mystery, drama, and romance. Start spinning the hottest casino slots to win huge jackpots and unveil clues that will help you find the mysterious hidden treasure of Las Vegas! Hop in for a road trip around the world and collect Journey Stamps along the way! Download Cash Journey now to claim your Welcome Bonus 3,000,000 FREE COINS!

Play classic slot machines and pokies just like those in real casinos for free! Even better yet, you get to play the newest and most innovative slot games that you won’t find in casinos and are only available exclusively on Cash Journey!

🔎 SOLVE THE MYSTERY TO FIND THE TREASURE 🔎

▶ Collect rewarding prizes on your journey.

▶ Are you ready to help Alice save her best friend?

▶ Do you have what it takes to find the hidden treasure of Vegas?

Cash Journey is available to play today on the Apple App Store and Google Play Store. Jenna and her husband, Kyle, on their wedding day.

This Employee Spotlight is all about the bright and talented team member Jenna Hume. Read on for her thoughts on work, play, and Discovery Channel's Shark Week.

What's your favorite thing about working for Brunette Games?

The team! Not to sound sappy, but your coworkers can make or break your experience at a job, and my coworkers at BG have made this job an amazing experience. We all collaborate on projects well, cheer each other on, and respect everyone's creative voice—I couldn't ask for a better group of people to work with.

What's your favorite thing about being a game writer?

Coming up with fresh concepts! I love thinking outside the box and giving our clients new ideas players will hopefully love.

What do you like to see in games as a player?

Main characters with personality—there aren't enough of them out there. I get that we as writers and designers want our games to be relatable, but you can do that while still having interesting characters. A great example is our work on M&M'S Adventure, where the characters have plenty of personality.

What's your favorite movie or TV show? Why?

MTV's Teen Wolf will always hold a special place in my heart. Is every season good? No—Season 4 was horrible. But the good seasons are amazing, and the show is overlooked as a whole due to the MTV label and a mediocre first season. The best season by far is Season 3b (don't ask me to explain how the seasons work—no one knows, especially Jeff Davis), and Dylan O'Brien deserves way more credit for his acting this season than he received.

What's a surprising/interesting fact about you?

I'm absolutely obsessed with Discovery Channel's Shark Week. It's a problem. I've watched annually since 2005, and my family knows not to text or call me while new specials are airing. My favorite shark is the bull shark, because they're problematic and can swim in both fresh and saltwater. Don't ask me my opinion on the celebrities featured in Shark Week; I could and will rant for hours.

How do you like to spend your personal time?

Currently most of my personal time is spent trying to get caught up on Critical Role, which seems like an impossible task and one I almost regret. The internet is scary and full of spoilers.