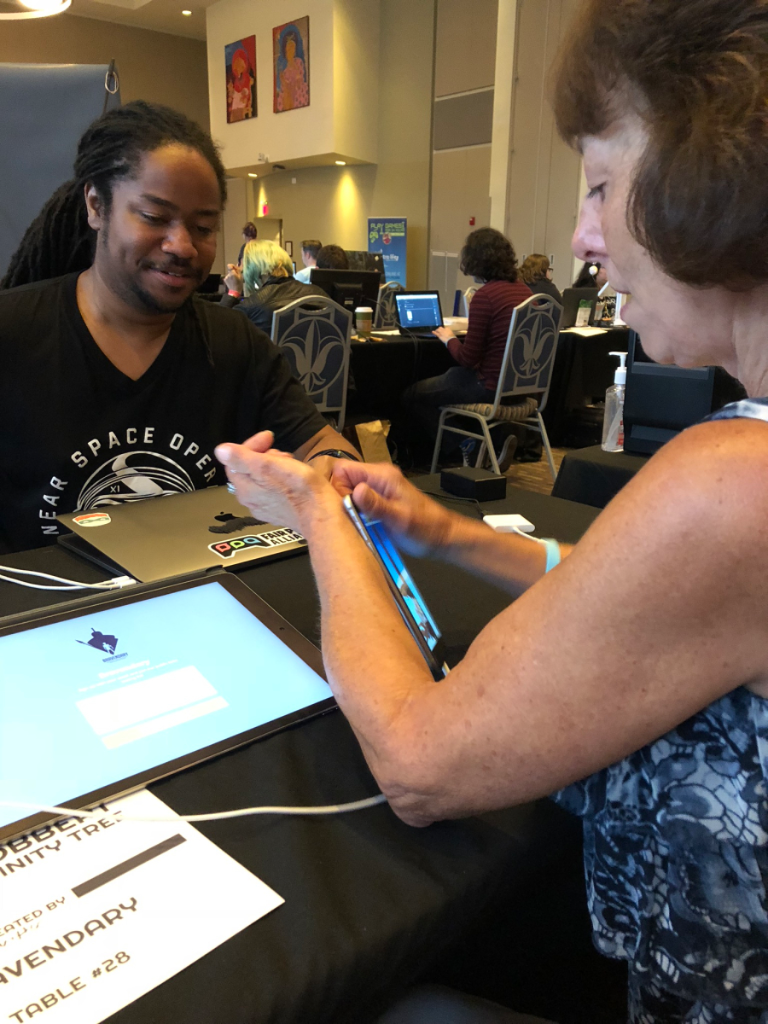 Two full days of diverse conference sessions from industry professionals are curated to equip you with creative tools and resources to make remarkable work that makes a difference. Plus, our official after-parties are designed to help you unwind after the conference and see more of what St. Louis has to offer.

This year Dexter Woltman will represent Brunette Games at PixelPop, so if you're planning to go, please get in touch with him to connect. To support the festival, I offer the below recap of the 2018 event to give you a sneak peek at what might be in store for you this weekend.

As mentioned previously, I gave a presentation this weekend at PixelPop Festival. (If you missed it and wish you hadn't, there's also coverage on the blog with the post "Narrative Design 101: Do We Need Stories? How Do We Make Them Work in Games?" because apparently I'm obsessed with questions-as-headlines.)

Organizers Carol Mertz and Mary McKenzie Kelly and their super-cool army of volunteers did a fantastic job of creating and running a high-quality, highly-inclusive game con. More than one person I met commented on the open, friendly, encouraging atmosphere and the extremely helpful takeaways.

Here are some pics!

The expo hall was overwhelmingly dominated by console games, but I stumbled upon an awesome mobile game by developer Bravendary (photo at top), and since I was tasked with judging games for the Select Award, I gave it my vote. Super Bobbert and the Infinity Tree is a "risk/reward collection game." You play by dragging your finger on the screen or tilting your device to move a pair of telescoping hands up a tree, rescuing kites, balls, and yes, cats–and avoiding collision with tree branches. I gave them some feedback about making the game more accessible to casual players, but I think it's super cute and has great potential. I'm excited to see two developers of color bringing something new to the table.

One of the most interesting talks I attended was the fireside chat between Leah "Gllty" Hayes, a Street Fighter e-sports champion and Jason Li, a longtime fan and competitor in fighting games. Hayes first learned to play in the arcades of her youth here in St. Louis and is from nearby St. Charles. I knew nothing about fighting game culture and found her insights into the differences between U.S. and Japanese subcultures fascinating. For example, in Japan, gamers might be somewhat hostile to those outside the homogenous Japanese culture, but they are very supportive of women learning to game. 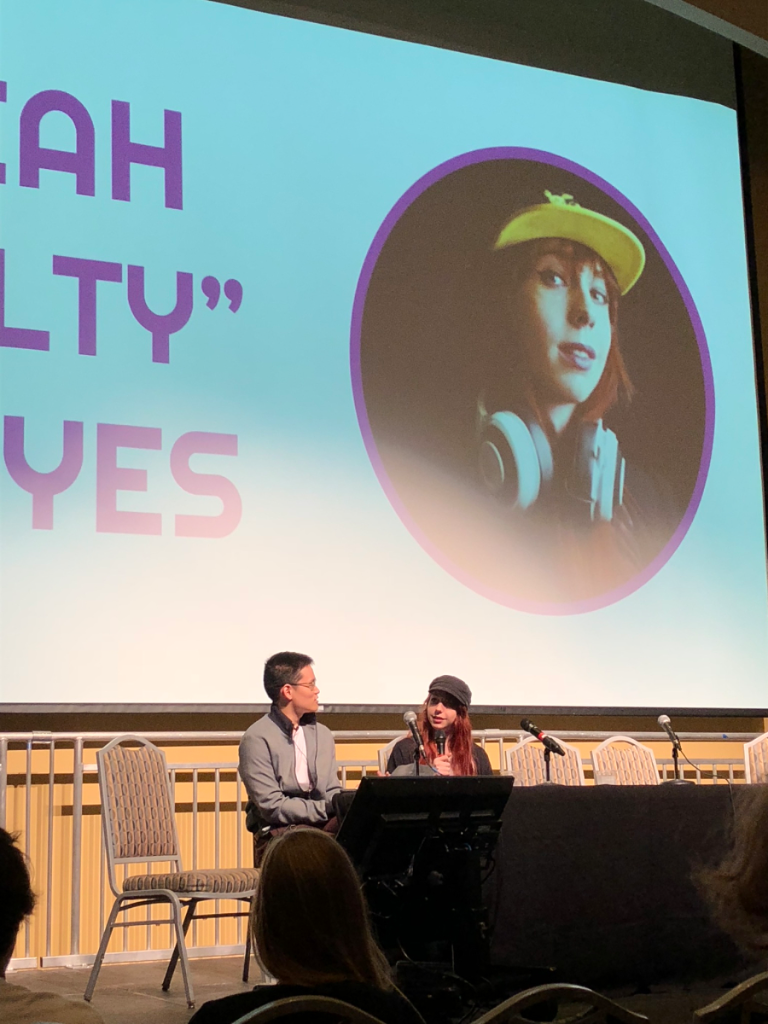 Here's a demo of a game in development called Stepsisters. It's based on the darker, Grimm's fairy tale version of Cinderella, so the object is to, um, get your toes cut off in order to fit your foot into the glass slipper, marry the prince, and win the game. I feel kind of conflicted about it, but I was schooled on feminist references to classic fairytales in the style of Angela Carter's The Bloody Chamber. What do you think? 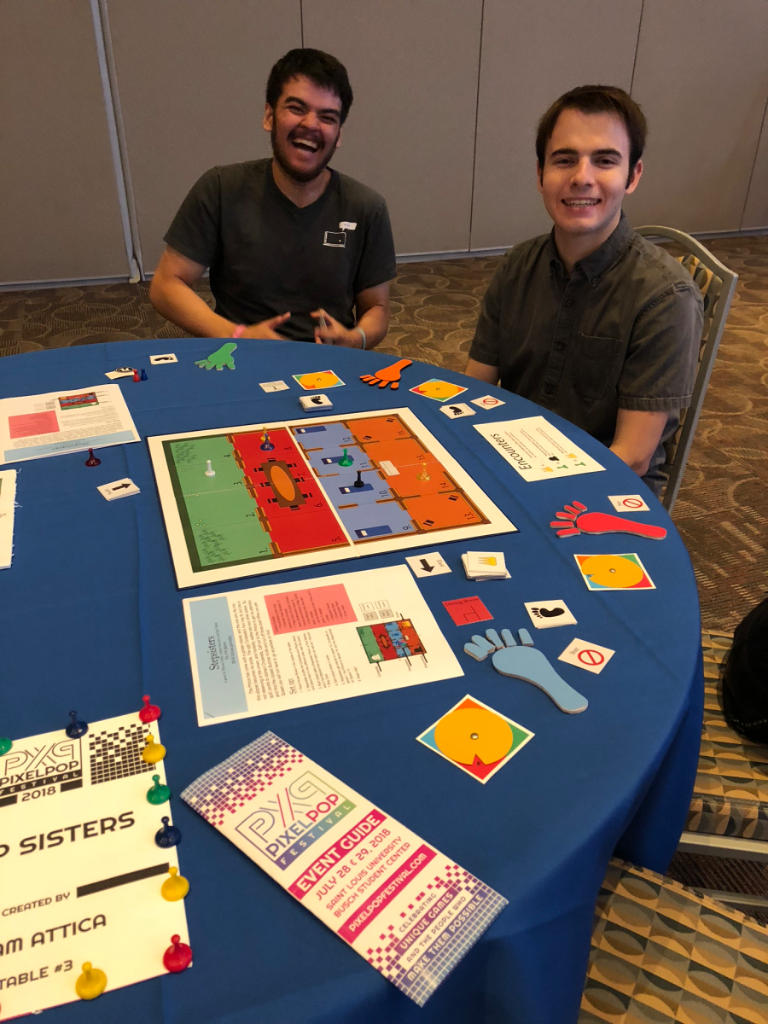 Created by students from Bradley University. Pictured here: Warren Guiles, who's in St. Louis this summer interning with Graphite Labs, and Jake Velicer. 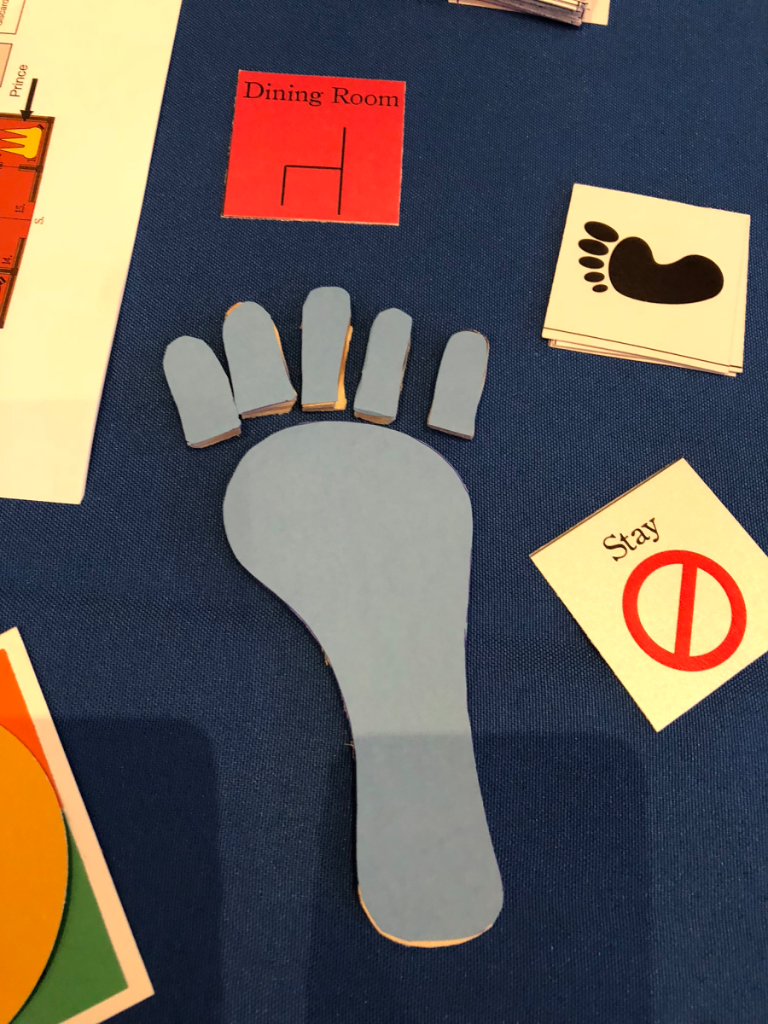 Creepy, or cool? You tell me.

In the category of "That talk you wish you hadn't been late for" is Kevin Snow's presentation on accessibility in games, but I made up for it with a one-on-one afterward, and I managed to snap a pic of this super-helpful collection of resource links. 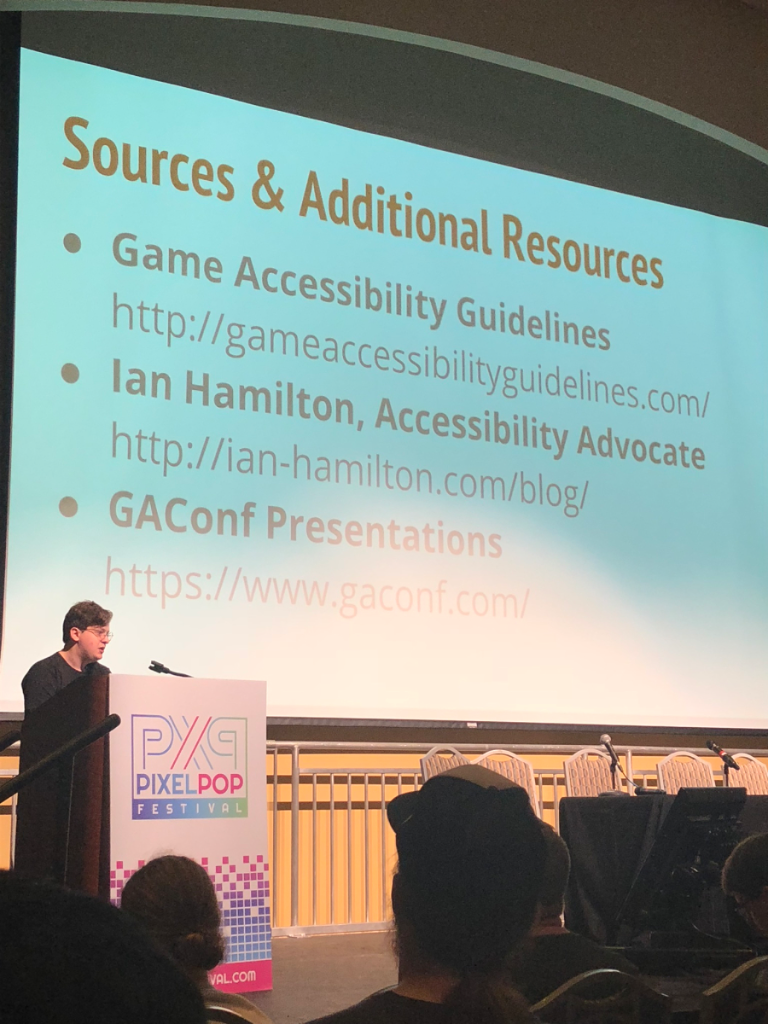 Next is a couple of guys down from Chicago, reps from a student-run studio at DePaul University. I was drawn to their table because they had a bunch of books on display, and book/game crossovers are something I would like to see much more of at game cons. They used fish for controllers, so even though I'm not into fighting games, I had to play this one. 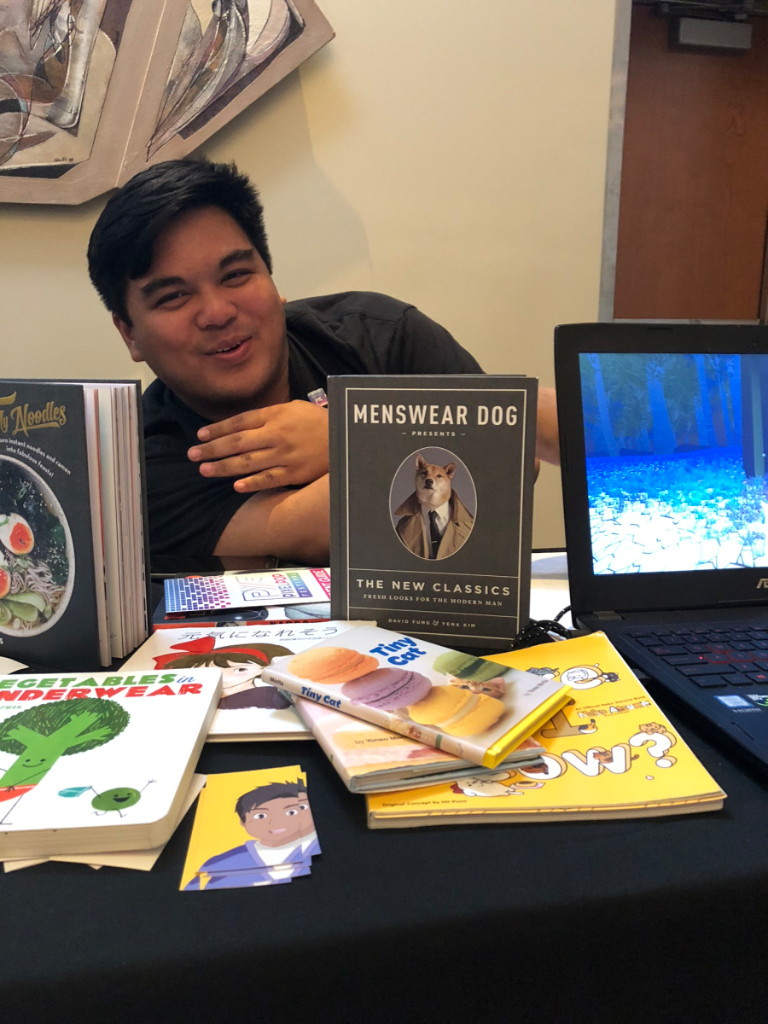 The game is called Sashimi Slammers.

One of the cool things about attending a game con in your own town is running into former students--which happened a lot! It was great to see so many game design majors from Webster University representing. Here's Sarah Brill, showing off a game she helped create through her summer internship with local developer Graphite Labs. 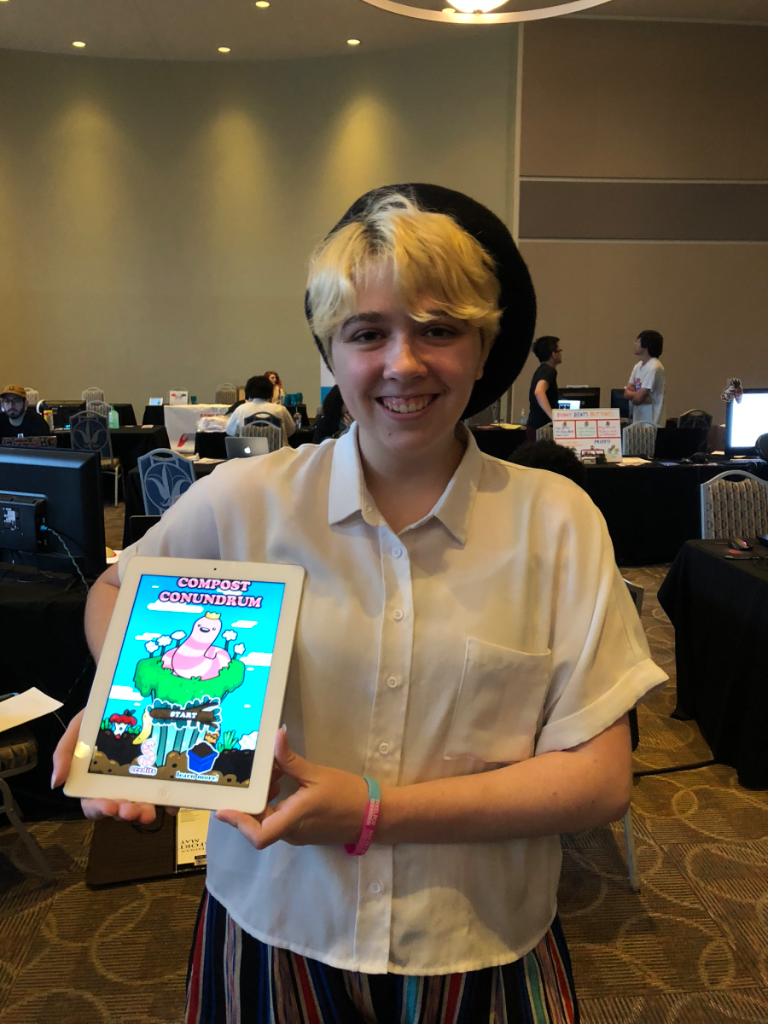 Sarah created art for Compost Conundrum, an educational game about the value of garden composting.

Another Webster face in the crowd was my friend and former colleague Rob Santos, there showing off a unique game interface. You communicate with a spirit through a Quija Board to uncover a mystery in the game Good Luck. The planchette lights up over letters on the board, allowing the spirit to relate the tale. 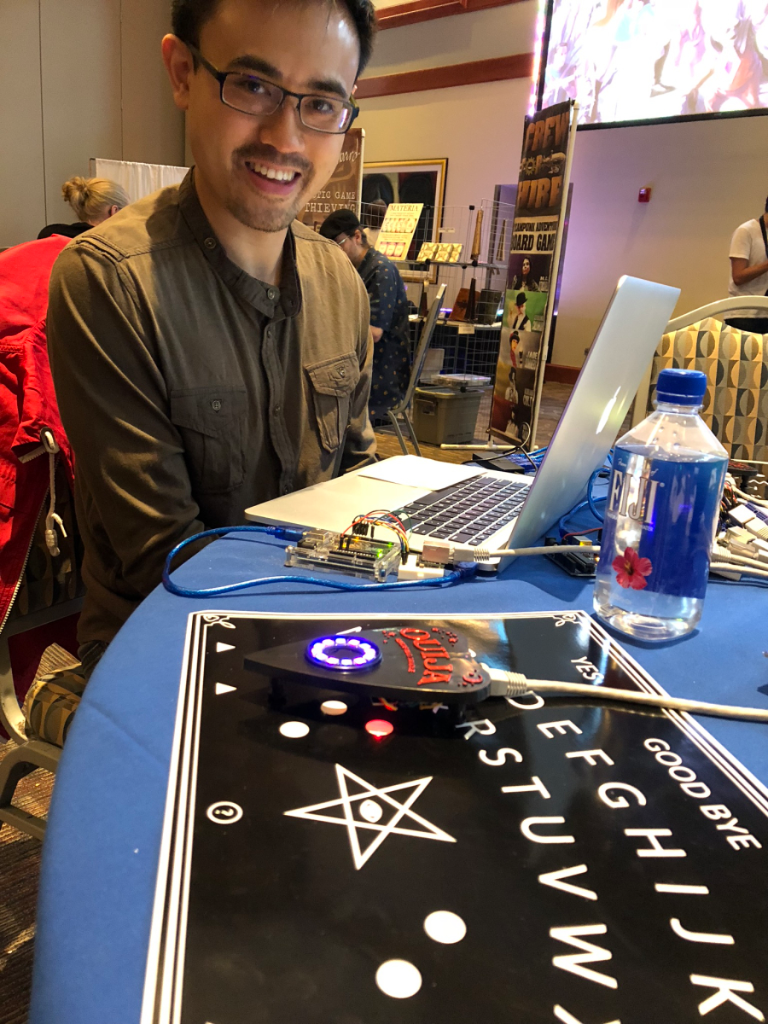 The creativity on display here is why students rave about Rob as a teacher.

I think I might have been the oldest presenter at this youthful con, but it's OK. I just told everyone the reason my hair is this color is because I'm a Targaryen. 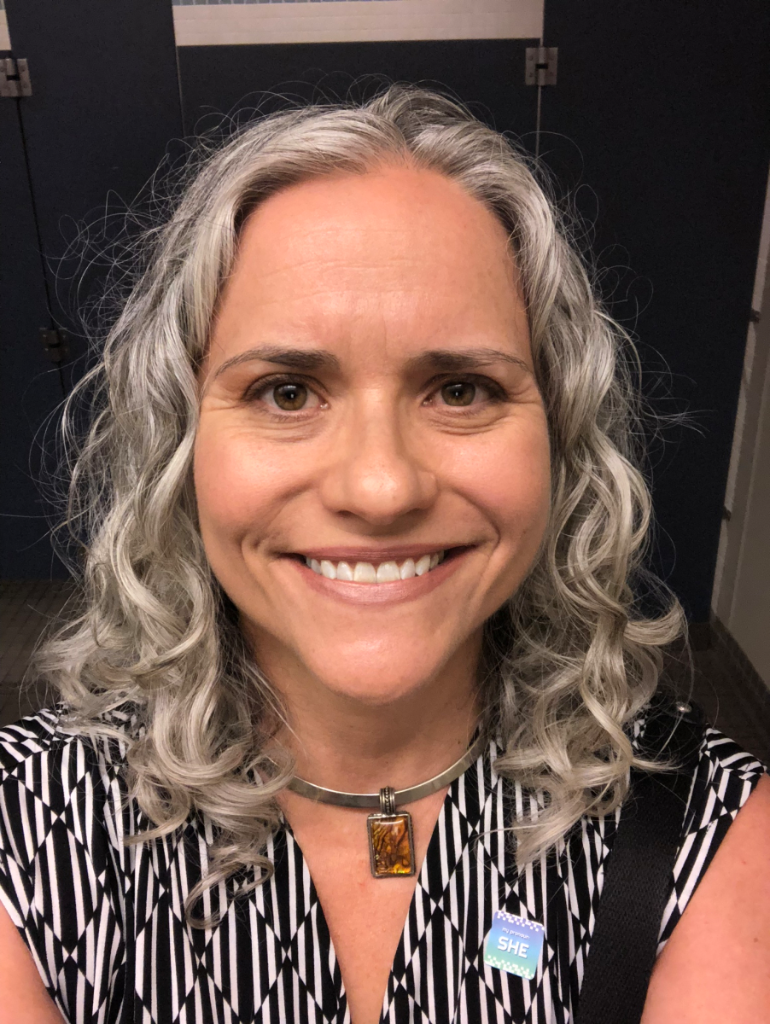 I chose "she" as my pronoun sticker only because "She Who Must Be Obeyed" wasn't an option.

Now attending this con was for me personally a surrealist series of flashbacks. Some of you know last summer I moved back to the Midwest after nearly 20 years away. This con was at my alma mater. 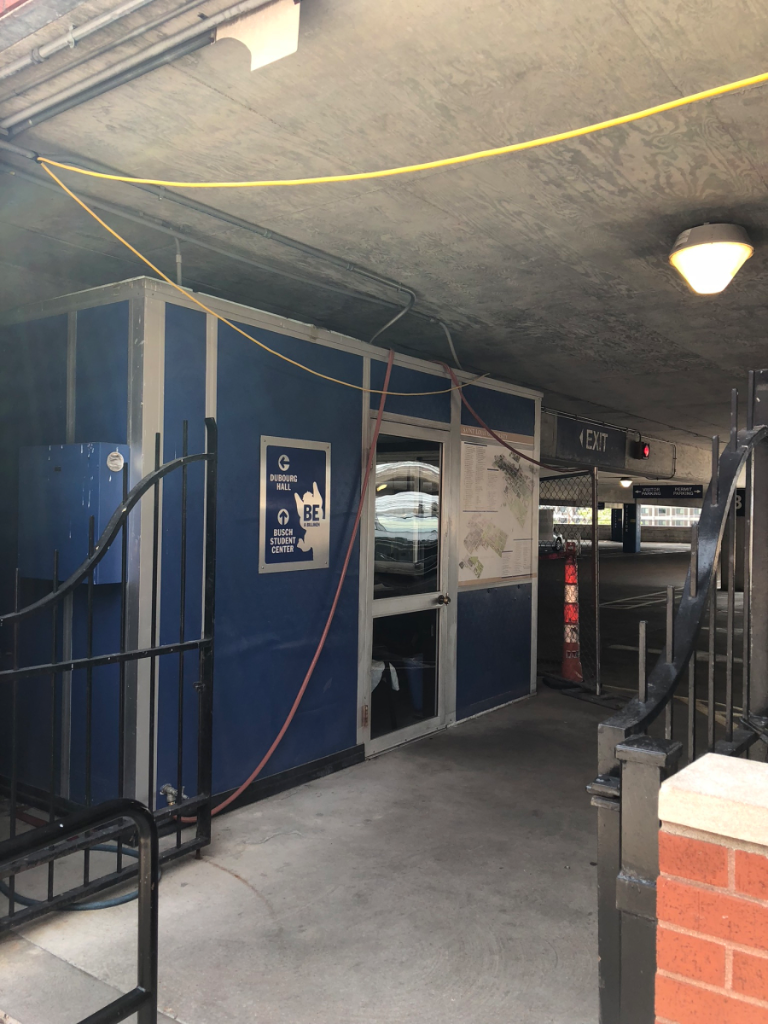 I staffed this cashier booth when the garage first opened. It's now undergoing renovation, and maybe I am, too.

To conclude this pic-laden recap, I've presented at and/or attended big cons like GDC, Casual Connect, AWP, and PNWA. But this is one of my favorites for the inclusivity, friendliness, and hometown vibe.